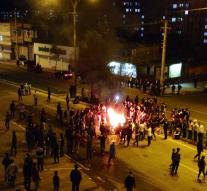 diyarbakir - In the Turkish and ethnic predominantly Kurdish city of Diyarbakir Sunday night riots broke out after the parliamentary elections. Security forces have fired tear gas fired at demonstrators who threw stones.

The protesters turn against the election results that they see as forged. There is a large profit made ​​by the party of the Turkish President Erdogan, the Party for Justice and Development (AK). The Kurds are angry about the policy of Erdogan, in their eyes, among other things led to the toleration of Sunni extremists of Islamic State and the failure of the peace process with the extremist Kurdish armed group PKK (Kurdistan Workers Party).