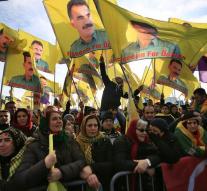 cologne - In a demonstration, among others Kurds in Cologne it came Saturday to skirmishes. A group of Kurds became clashed with police when one of the demonstrators threw fireworks and was called to account.

Police used pepper spray and batons to disperse the group. The man who threw fireworks was arrested.

In the demonstration against the Turkish President Erdogan did some 25 000 people participated. They waved among other flags with a picture of the leader of the banned Turkish labor movement PKK, Abdullah Ocalan. The flags are not banned in Germany.