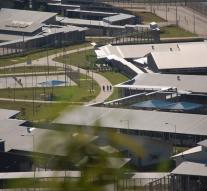 - In a detention center on Christmas Island where refugees are received his early Monday morning rioting broke out. Following the death of a man who was staying at the center, according to Australian media.

The Kurdish man from Iran had escaped and was found dead Sunday at a cliff. A hundred asylum seekers then rebelled. Guards would have fled the city center after a fire was founded and were destroyed include fences and walls. " There was no emergency team, there was no monitoring, there was nothing. They have gone away. They flipped and ran off ", said a fellow detainees against ABC Radio. No people were injured.

Christmas Island belongs to Australia and lies 380 kilometers south of Java in Indonesia. Australia begins next seekers foreigners whose visas have expired on the island.