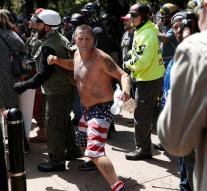 berkeley - A demonstration of supporters of US President Donald Trump Saturday in the city of Berkeley (California) quite out of hand. There fighting broke out when protesters wanted to disrupt the meeting, reports the Los Angeles Times.

Supporters and opponents of the president came to blows near the park where the event would take place. Both groups throwing stones and sticks to each other. Also, fighters used a large trash can as a battering ram and fireworks and smoke bombs flew through the air. Several people were slightly injured.

It was the newspaper the third time in a few months, the two groups clashed. The supporters of Trump had gotten this time strengthening bikers and other sympathizers who had announced to tackle the anti-fascists hard as they would misbehave.