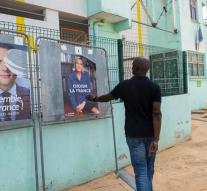 paris - Extreme right-wing activists in the United States have helped to quickly spread the large amount of data from a computer hack on the campaign agency of French presidential candidate Emmanuel Macron.

Researchers from the Atlantic Council's Digital Forensic Research Lab discovered Saturday night that the stolen data was razor-sharp on a variety of Twitter accounts and could be spread out. Who the activists are precise has not been announced. The investigation into the case is still underway. Russia is also suspected of involvement in digital theft.

Within three hours 47. 000 tweets were placed with the hastag #MacronLeaks. The first to send a tweet was Jack Posobiec, a writer of the right-wing American site The Rebel TV. He also conducted a campaign for presidential candidate Donald Trump last year.

Posobiec denied that he was behind the large-scale automated spread of the tweets. He would say that he only shared a message about the hack from the site 4chan via Twitter.

French media were not allowed to publish the content of the leaked e-mails from the Macron campaign team and did not do that on Saturday. Publication was seen by the French Electoral Commission as a crime.

Sunday, 47.5 million French to the polling station for the election of a new French president.