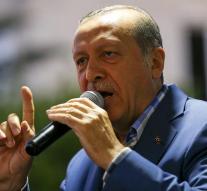 - Mustafa Karadag, using the president of the Turkish Association of Judges (Yargiçlar), the authorities on Saturday accused the failed coup to turn critics within the judiciary. There are not only arrested people who supposedly stood behind the coup, but also opponents of President Recep Tayyip Erdogan, which has nothing to do with the attempt to bring down the government of doing.

Apart from a small three thousand soldiers accused are ten members of the State Council, one of the highest legal institutions, and anyone arrested by the Supreme Court. Five others of the latter body are put out their duties as well as more than 2,700 judges. According Yargiçlar there are in Turkey a total of between 14 500 and 15 000 active judges.