Home / World / Right Putin shoots himself in the foot 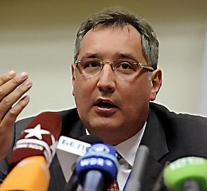 moscow - The man who by Kremlin watchers is seen as a possible successor to Vladimir Putin, already showed less good with firearms to go than the current Russian president.


Deputy Prime Minister Dmitry Rogozin missed a cabinet meeting and a personal meeting with Putin 'by a leg injury for which he is being treated in a hospital, 'said the official message.
The persistent rumor that the 52-year-old politician has injured himself at the shooting club. Rogozin there would have his weapon accidentally go off. His aides say that the vice premier suffered his injury 'during a game of handball.
Rogozin is known as a gun enthusiast- he posed with members of the American gun lobby- and as a hawk in Putin's entourage. He was closely involved with the (secret) Russian offensive in parts of Ukraine, and at the Moscow air strikes on Syrian rebels.
NEW