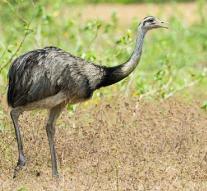 - A group rheas, ostrich-like animal from South America, seems to feel at ease in a nature reserve in the north of Germany. In the Biosphere Reserve Schaalsee, on the border of the states of Mecklenburg-Western Pomerania and Schleswig-Holstein now walk almost 180 rheas around.

They are descended from animals that years ago escaped from a pen pension. This year alone, the population has increased by nearly sixty animals. Biologists in the reserve, however, do not speak of real growth. Many of the boy survive the winter weather not allowing the population, which will decline.