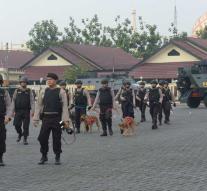 In the early Thursday morning (local time), according to the police, most of the insurgent prisoners had surrendered. Presumably, more people have died there. The only thing that the police wanted to say about this was that 'the number of victims has been kept to a minimum. '

There are convicted terrorists and suspects of terrorism in the high-security prison. The uprising broke out Tuesday between staff and detainees after a dispute over food checks. On social media there were images of armed prisoners with a flag of Islamic State.