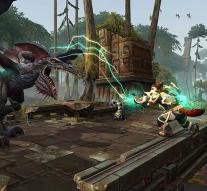 - Exotic islands, two ancient factions and a bloody war that has continued. These are the themes that embody Battle for Azeroth, the seventh and newest expansion of World of Warcraft.

Battle for Azeroth is the latest addition to the wildly popular MMO World of Warcraft, a role-playing game in which thousands of players simultaneously play in a huge, open fantasy world. In the previous expansion, the two largest and rival factions, the Alliance and the Horde, had to join forces to defeat a demons army. But now the joint threat is defeated, the battle axes are being dug up again and it is time for an old-fashioned war.

Both factions are therefore looking for new and fresh forces that can help them win the war once and for all. That is why the players of the Horde are sent to the tropical island of Zandalar, where the Zandalari trolls hand out the sheets and have a large army of warriors at their disposal. Players of the Alliance are in turn sent to Kul'Tiras, a Scandinavian-like island that is populated by the Kul'Tirans. This human race always feels attracted to the sea and therefore has a fleet that can not be mocked.