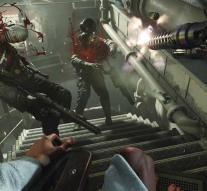 - Where Nintendo is generally known as the company that only brings peace-loving games to the market, with its latest console it also manages to attract titles for the older audience. With Wolfenstein 2 for the Nintendo Switch you can get started with shiny shooting irons in a spectacular adventure.

The Switch version is certainly not the most beautiful, but the core of the game remains fortunately intact.

Within the world of games, there are a few series that have lasted quite a few years. One is Wolfenstein, a series of games in which the fight against many Nazis is central. That is no different in Wolfenstein II: The New Colossus, the sequel to Wolfenstein, released in 2015: The New Order. You creep into the role of William Blazkowicz. In an alternative world, the aforementioned Nazis did win the Second World War and the German troops now have the whole world in their grip.

Yet there is light on the horizon in the form of the resistance, within which Blazkowicz plays a major role. In Wolfenstein II: The New Colossus you focus, after making Europe a bit safer in the original, on American grounds. Blazkowicz was born and bred in the United States, so it is high time to free the motherland from all German evil.