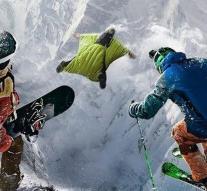 - Winter sports: you have to love it. And in theory I think it's pretty cool though: rapidly which slopes with a snowboard. But it's cold, wet and dangerous, so I prefer to do it all digitally. And let Ubisoft now recently launched its latest winter sports title Steep...

Although, 'winter' for Steep might be a bit of a restrictive title. Besides skiing and snowboarding you can also include paragliding or a wingsuit jump off the mountain. To facilitate this, the developer has made a huge open game world where you can go pretty much wherever you want.

Steep feels from the beginning very open to. You will not be going on and actually get just presented an entire game world with a number of events that you can do. Allows you to earn experience points, which you as a player again rises in level. A higher level means new boarding points and events to take part, but this type of 'progress' never feels like the core of the game.

No, it's more about racing on the experience of having a snowboard mountain. Or with skis. Whether flying with your wingsuit. And they all feel very well. At least, it is clear that snowboarding is the star in this game, although it is difficult to explain exactly why. It 'feels' just right. Perhaps that is because it is quite simple account: you slide down automatically and all you have to do is avoid the trees, rocks and other objects. Oh yeah, and occasionally jumping and doing a trick, though the latter is also kept quite limited. So you can do some flips and spins, but grind should not, for example to the repertoire. A bit of a shame, but in the end doing 'sick tricks still not the focus of the game.

The skiing also feels good, though there is in this game not given much difference between the two sports. Of course, the paragliding it feels different, though I found this sport quite boring. The only thing you do is a little hang parachute and occasionally slow down a bit or down faster. however, skydiving with the wingsuit is spectacular because Steep knows how to create a good sense of speed. The blood will be flowing as you shoot off like a madness of the mountain!

In short, the base of the game it should be alright. Unfortunately, everything around it a bit bare. You only have a few different types of events that are primarily split into 'speed' and 'bold ness'. In the first type you must first reach the finish line in the second involves doing tricks or daring fly. A bit of a limited range, frankly. It all reminds of the first Assassin's Creed: The core of the gameplay is good, but it was just to do something more!\n  \n  \n   advertisement

Fortunately, there is also something to do. So you can directly explore. While snowboarding or skiing, you can directly here and new 'drop zones' discover. These are items that appear after the discovery on the map, which you can then be transported to. This will give you back access to new parts of the game world where you previously could not yet good at. Although it sounds rather dull on paper, it is 'discovering' this kind of new places particularly satisfactory.

Meanwhile, there is also a whole section in Steep online. In fact, the whole game is constantly connected. One can see here and other players shoot over and it's possible to go or do contests on the road together. But quite honestly: all done online does not add that much. Of course, every game more fun when you're with a well-known plays, but apart from that there just is not a connection between the players. Steep feels more like it invites to go out alone- precisely as the 'first' to discover new places I talked about earlier.

Steep is a bold experiment that was partially successful. The basis for topgame is there: skiing, snowboarding and skydiving feels good and the game world is well designed and fun to explore. Was there just to do something more, because the events here and you will be soon boring. Hopefully there also a Steep 2, who- like Assassin's Creed 2- gathers solid foundation and a heck of a game built around it.