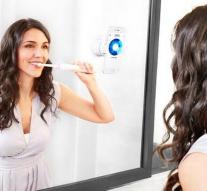 - Oral-B introduced a toothbrush that communicates via Bluetooth with an app in 2014. This is to stimulate that you are at least 2 minutes brushing the teeth. Oral-B Genius 9000 goes a step further and look where you're brushing.

Oral-B Genius 9000 is available in white and black and is part of a large package. In addition to the toothbrush holder in the box four set-pieces, a charging stand, a bowl for the set pieces (you can link to the default), a holder to put the smartphone on the mirror and a travel case to charge the toothbrush on vacation. It also has a USB port, for example, charging the phone. Handy in a hotel with too few outlets.

The electric toothbrush has six power modes that can be selected via a button on the handle. These range from daily cleaning and pro clean (polished with a higher frequency) to options for sensitive teeth and polishing for whiter teeth. The pulsating caregiver gums and tongue cleaner round off.

Oral-B Genius 9000 can link via Bluetooth on the phone. New to the toothbrush is that it uses through the Oral-B App of the smartphone camera. With the included holder, place the phone with a suction cup on the mirror. Larger smartphone models like the iPhone 6S Plus are not a problem. It is possible to connect the Genius on multiple phones, so that everyone in the household on their own phone can keep its polish sessions.

The app is a one-time use for calibration. give the green bars on the screen or smartphone hangs straight and if he is at the right height. While brushing you see on the display the zone you are brushing. This appears as a blue plane. You then polished white to pass on to the next zone. Incidentally, he registers sometimes wrong where you're brushing and sometimes you have to adjust your arm for proper registration. Start your camera off during brushing, a warning follows.

Oral-B Genius 9000 comes with 12 days without recharging. In addition, they assume two brushings per day for two minutes. The battery then lasts about 48 minutes. It takes 12 hours to charge the toothbrush, but it is enough recharged after 30 minutes for brushing once. If you do not have at hand while brushing the phone, then he hits the brushing sessions at the moment who can sync again with the app.

The brush is equipped with a smart ring which not only glows red when pressed too hard on the gum, but beyond setting is satisfactory in 12 colors using the Oral-B App. All family members can choose a custom color from this app.

Each brushing is thoroughly recorded in the app. He gives the percentage that you have cleaned the areas, the duration of the session, and if you press too hard during brushing and for how long. The app points users will continue to flossing, using mouthwash and when you need to replace the brush head.

To miss encourage you not brushing is Oral-B trophies added to the app. This happens when you for example 7, 14, 30 or 60 days neatly polished row. Do not miss a session? Then the recording starts again from the beginning. Personally I kept not working on it, but a family can be as mutually comparing the performance.

The free app, you can also use a less expensive Oral-B toothbrush. It has no Bluetooth, the app can also hear and turned the brush and thus calculate whether you get the recommended two minutes.

Oral-B Genius 9000 with a suggested retail price of € 299 not to mention cheap, though you can find it online now cheaper. Philips Sonicare Diamond Clean cost € 210 but does not use an app. For a cheaper bluetooth brush the most out of the app is Oral-B TriZone 6000 from € 150 fine.

Who takes tooth brushing seriously, can indulge themselves with the Oral-B Genius 9000. The use of the camera in conjunction with the app ensures that brushing is fully utilized. In practice, the question is how often do you really depends on the mirror the smartphone. If you're not sure, take a cheaper TriZone brush and save money.