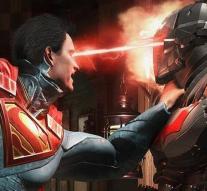 rolf venema - Games developer Netherrealm knows most of the Mortal Kombat games, but did not make a non-profitable knock game around the superheroes of DC Comics. Now there is the sequel.

In the base, Injustice 2 is a fighting game in which two characters- in this case superheroes or villains- contradict each other until the health bar of one of the two is empty. A classic formula, so, but the game brings it in a unique way.

First of all, it's a story mode where you constantly go through other characters- another twisted captivating story. I do not want to explain too much, but I preferred this rather than the Suicide Squad movie or recent Superman movies.

Besides the story there is of course a variety of multiplayer modes in which you record online or offline against human opponents. Here you can choose whether you want to use your deserved 'loot' weapons, helmets, pieces of harness and costume- or not. This loot is important because it can make your favorite warrior more powerful or even give him / her completely new attacks.

Fortunately, there is also a lot to do for the player who wants to play alone. For example, there is multiverse mode, in which you must meet certain challenges in advance. These are semi-randomly assembled so you can only lose this mode for hours and hours.

So there's plenty to do in the game, even if you do not want to fight against others online. But more importantly does it also work a bit? Then I can answer with a full-blown 'yes'.

The beauty of this game is that it offers something for all levels of experience. Even as a complete newcomer, you can still have fun by doing basic attacks. It also helps each person to have a special attack under one of the basic buttons.

If you want deeper, then you can learn some ins and outs with the help of tutorials for each person, although practice is still the best teacher. And then it turns out that you can go deep into Injustice 2.

Injustice 2 is a masterful fighting game for both complete beginners and experienced pro. In addition, you can even enjoy hours without fighting a human opponent, something that never happens in fighting games. Highly recommended, so!

+ Lots to do, even outside multiplayer