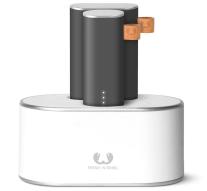 - Generally smartphones go almost a whole day with it, but with intensive use battery saves often just not at home. In such cases it is useful to have a power bank with you. Fresh 'n Rebel them in three sizes and lots of trendy colors.

The colors are matched to the other product lines Fresh 'n Rebel and finished with soft plastic aanvoellend. They are aimed at both men and women. So you have at one end of the spectrum, dark blue, army green and gray on the other hand, light pink and turquoise.

Power banks are equipped with the necessary security. There is current limiting and over-voltage and short circuit protection so you can charge the bag the phone or tablet without worry. As a result, the devices are also permitted on board an airplane.


This is the youngest of the power banks (€ 19.99). The small device (95 by 30 by 25 mm) is good for a charging of the phone. For a phablet or tablet has too little power. With his size and weight of 78 grams only takes place in the bag. Charging is very simple: plug the USB cable from the phone into the power bank and press the button. The four lights indicate how full the gadget is.

The 6000 mAh power bank (€ 29.99) loads a phone twice and a small tablet once. You can also use it okay to give a camera or iPod more energy. Thanks to 2,4A port it charges devices faster. With a size of 95 by 52 by 25 mm and a weight of 140 grams, the gadget is still practical, while he can handle more than the small model.

Who route more power is necessary because for example, you go to a festival, then comes the big boy (95 by 68 by 25 mm and 198 grams) handy. It can charge three times a phone, a small tablet twice or once a large tablet. The power bank (€ 39.99) includes two connections (a 2,4A- and 1A) port so you can charge two devices simultaneously.

Power banks are charging via a micro USB cable, but Fresh 'n Rebel also has brought a charging station on the market. At the top are two openings in which you place the template that suits the size of your power bank. Then you can have two simultaneous charging two. The box contains six molds: for each type of power bank two. On the sides are two USB ports to charge other devices. How to create a central place in the house where everything can be charged. The Charging Station is available separately for € 29.99 or for a benefit package with one or more power banks.

Power banks do what they should do, look good and are favorably priced. For every wish is to find a suitable gadget. The charging station is very convenient because you have a fixed place in the house to charge all devices.