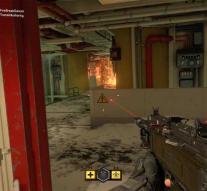 - In addition to being able to count on public holidays every year, you can also count on a new Call of Duty being issued. This year the game only comes a few weeks earlier than you are used to, namely October 12.

What is immediately noticeable is that the usual story (the campaign) that you can only play is replaced by a brand new mode, but whether that is a good choice remains to be seen.

Call of Duty Black Ops 4 is the newest part in the series of shooting games that have been released since 2003. From the Second World War to the distant future, Call of Duty has dealt with it all extensively and with Black Ops 4 the near future will be discussed again. You will not notice this by means of a narrative 'campaign', because Black Ops 4 is the first Call of Duty that does not present its own storyline. The shooting game focuses on three different ways to play online with others or to take it against them and that ensures a varied selection.