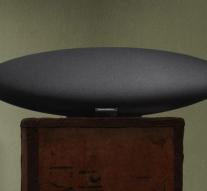 - Zeppelin audio specialist Bowers & amp; Wilkins may be best known as a speaker icon in the world. The unit was one of the first really notable speaker docks for the iPhone, even though he was quite pricey. Now there's the Wireless, a wireless variant in which the dock area is omitted and reliance is placed on AirPlay and Bluetooth.

The installation of the device is kept very simple. Through the associated app to the speaker on the correct Wi-Fi network can be connected. Do you have an iOS device, it's even simpler : all the Zeppelin will appear in the Wi-Fi menu in the phone's settings as an accessory. One tap and all the login information for the network will be immediately transferred and you can start streaming music.

While the dock is gone, the striking shape of the speaker is preserved. The unique shape ensures that it can stand out, though he is working too well off in many interiors. I myself had put him on top of the TV cabinet and fit it well above my black tv, set top boxes and game consoles.

At the rear, the play, Skip and Back buttons available, though I've never actually used in practice, everything can also be done via the connected smartphone. All the way at the back of the base of the speaker openings are also to be found, among other things, for the power supply and any auxiliary cable.

Stream music to the speaker is a piece of cake. Whether you 've linked him well through AirPlay or Bluetooth : from any music app makes it easy to select the Zeppelin as well, and the music is sent directly to the device. There is a special app for the iPhone, but it is primarily intended for installing and updating the firmware.

Zeppelin Wireless is equipped with four 25 Watt amplifiers for the two tweeters and mid- speakers and a dedicated 50 watt amplifier for the subwoofer. What does this mean in practice? Firstly, that the speaker is quite loud and can fill an average room no problems with noise. Zeppelin will almost everybody also can serve as the main music player.

Second, ensure the speakers for great sound quality. B & amp; W 's mission is to provide the music as pure as possible, without extra bass or other adjustments. That's always my personal preference and I was therefore disappointed. The acoustic work of Bob Dylan to the electric blues of Stevie Ray Vaughn and raw hip-hop Run the Jewels to the hard thrash metal of Slayer: everything sounds flawless and exactly as it should. However should the files you use high quality : thanks to the good sound you can hear suddenly that MP3s are badly compressed.

What I also noticed is that the separation of the stereo channels is very good, despite it all comes from a single device. This is among other things due to the design of the speaker, because in both 'points' Zeppelin a tweeter.

Incidentally, there is to the naked eye is not that much difference between streaming via AirPlay or Bluetooth. On paper you have with Apple's standard more bandwidth and theoretically better sound. Maybe it's because I 've mostly been listening mp3s (which provides a fairly strong definition uncompressed audio) but a huge difference, I could not discover.

Zeppelin Wireless is one of the best speakers I've ever tested, but I should mention that while this is also one of the most expensive in its category that I have had under eyes (or ears). With a suggested retail price of € 699, he is far above most AirPlay and Bluetooth speakers.

Sonos and Denon are still the closest to the price range of the Zeppelin. The Sonos Play 5 is available for around € 500 and has the advantage that it can be part of a multiroom system, where the speakers are independently or together from the associated app to send. That misses the speaker Bowers & amp; Wilkins then again. The Denon HEOS 7 (€ 599) has the same advantage, and also offers good sound, though I found the Zeppelin still a lifelike hair. Do you want something cheaper, but still with good sound, then the Libratone Loop (available for around € 330) is a good option.

The quality of the Bowers & amp; Wilkins Zeppelin Wireless is indisputable. The unit delivers great sound quality and is easy to use. There 's nothing to barter. Hopefully for buyers there is still to purchase its critics, because the retail price of € 699 is on the high side- but just to use an understatement. But are you a real music that attaches to good sound quality and are you willing to take the cut, I can not imagine that you 'll ever regret getting the purchase.