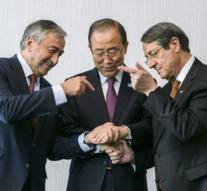 - The reunification of Cyprus has as yet failed. Negotiations were resumed break in Switzerland after a week, but both sides are not fulfilled according to the United Nations.

Nikos Anastasiades and Mustafa Akinci, the leaders of the Greek and Turkish Cypriots have two days of closed-door negotiations in the Swiss resort of Mont Pelerin.

'Despite their efforts, the two parties have failed to agree on territorial adjustment. This would have paved the way for the final stage of the talks. The two parties have decided to return to Cyprus to consider how to move forward, 'the UN said in a statement.

Cyprus has been divided since 1974 after a coup by supporters of union with Greece, and Turkish military intervention.