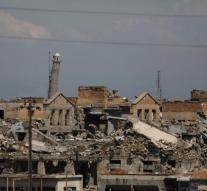 arbil - The Iraqi air force attacks on strongholds of the Islamic State group resumed in the west of the city of Mosul Tuesday. The attacks were recent days stopped because of cloud cover. Ground forces are preparing to march on the Great al-Nuri mosque in Mosul, where IS leader Abu Bakr al-Baghdadi nearly three years ago in parts of Iraq and Syria proclaimed a caliphate.

In the northwest of Mosul is fighting in an area with narrow streets, where IS fighters entrenched among the population. This limits the possibilities to use artillery, the air force and armored cars. Iraqi forces conquered part of Mosul to the east of the Tigris river is in January and February.

Since the attack in Mosul was deployed in December, according to the United Nations, more than 300 000 people have fled the city. The United Nations extend camps north and east of Mosul to absorb more fleeing civilians.