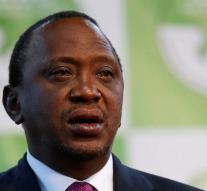 nairobi - The Kenyan presidential election must be reversed within sixty days. The Supreme Court in the East African country ruled that the electoral commission had blamed 'irregularities and irregularities.' The victory of sitting president Uhuru Kenyatta is therefore invalid.

The court ruled in a case invoked by the Kenyan opposition. Opposition leader Raila Odinga believes that President Kenyatta has been re-elected by joking with the results. After the elections, violations took place because of disagreement on the outcome.