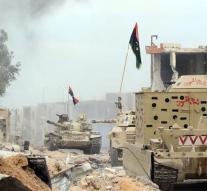 sirte - More than six months have been trying Libyan government soldiers to dislodge the terrorist group Islamic State from the city of Sirte. But taking one last piece of land on the Mediterranean appears the hardest.

The troops will proceed cautiously, partly out of concern about families or prisoners still being held by the extremists. On top of that they also have to deal with female suicide bombers who IS throws at them.

Friday was hit at various places. At least three women blew themselves up and killed four soldiers, after they had been given a free passage with their children from buildings owned by IS escape. Another 38 soldiers were wounded, said an army spokesman.

The army, which will air support of US aircraft, Thursday claimed the shelling after a period of relative calm again.