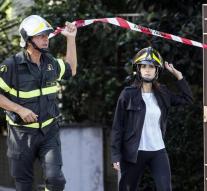 rome - Rome is Saturday collapsed a residential building of four floors. The 110 residents of the building could just be in time to safety.

The residents alerted the fire itself when suddenly emerged cracks in the walls and were heard strange noises around. The fire department evacuated initially only part of the property, but the frightened inhabitants of the piece itself fled to the streets. Rightly so, because the whole house broke.

The cause is still unknown.