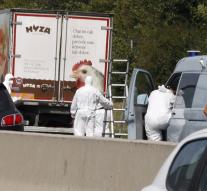 - Three months after the drama with 71 stitched refugees in a truck on the Hungarian- Austrian border, the researchers in Austria have completed their work. According to the police bodies 69 have been identified.

Among the dead are 28 Iraqis, 21 Afghans (including a family of six), 15 Syrians and five Iranians. The victims had the researchers not stand a chance in the airtight truck. There was only enough oxygen for half an hour to three quarters.

On August 27 the bodies were found in the refrigerator truck on a highway at Parndorf. Five suspects, four Romanians and an Afghan, were arrested and are stuck in Hungary awaiting trial.