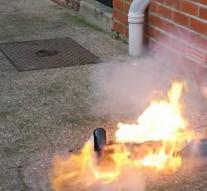 amsterdam - The Dutch Food and Welfare Authority (NVWA) will conduct an investigation into the safety of the razendpopular hoverboards. There have been several reports of hoverboards that suddenly exploded recently. The NVWA wants to know how that is.

Since March this year, the organization received four reports of fires caused by hoverboards. These fires usually occurred while charging the devices. Driving hoverboards often goes wrong too. Every month, about one hundred to 150 children get to the emergency aid because they are unlucky with a hoverboard. By 2016, 1,300 people were injured, according to figures from Safety NL.

In many cases, children break their wrists or arms. Most accidents happen on the public road; Officially, wheelchairs can not be driven with the sign. For comparison: a skateboarding yearly 1600 accidents occur. The severity of the injuries is comparable.

According to the Dutch Food and Welfare Authority (NVWA), the accidents with hoverboards are almost all due to the user. The NVWA does not have any indications that, for example, the stabilizer in the devices could not function properly. However, it is investigated why the hoverboards sometimes explode. 'We will first investigate what causes these hoverboards to explode,' says NVWA against RTL News. 'Based on this, we are going to set requirements that hoverboards that are sold in the Netherlands must meet. '