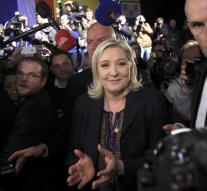 - The French prosecutor has opened an investigation into the leader of the National Front party, Marine Le Pen, after Wednesday gruesome pictures of a beheaded by Islamic State had twittered.

The tweet Le Pen was an angry response to allegations from a journalist that her party has similarities to the terrorist movement. Daesh THIS is she tweeted and posted three pictures of the beheading of US journalist James Foley. Daesh is the Arabic name for IS.

The prosecution is now investigating whether she has been guilty of, the spread of violent images, French media report.

The French Interior Minister Bernard Cazeneuve called the tweet shameful, horrible and a real insult to all victims of terrorism.