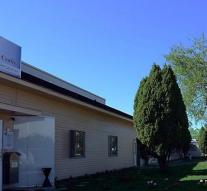 stockholm - In Järfälla, north of Stockholm, fire burned in the biggest shiite mosque in Sweden on Sunday night. Nobody got injured, but the roof and facade of the Imam Ali Mosque were severely damaged.

A spokesman told Swedish television that about 40 percent of the building was destroyed. The fire was discovered by guards shortly after 23.00.

The police suspect that the fire has been lit. The Swedish authorities take into account possible revenge actions after a man entered a stolen beer truck last month with a stolen beer in Stockholm, causing five people to die. A rejected asylum seeker from Uzbekistan is held as chief suspect for this attack.

Last year a small Shiite mosque in Malmö was the target of a fire attack. The extremist Sunni Group of Islamic States demanded that responsibility. A man was charged, but released.