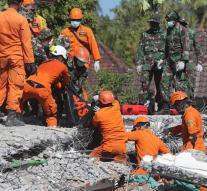 jakarta - Rescue workers still find survivors two days after the earthquake on Lombok. They took a man from the rubble of a mosque. A woman could also be rescued from a collapsed shop after a lifelong rescue operation. Residents had been alarmed when they heard the victim call for help.

The Indonesian authorities hope to save more survivors, but also expect the death toll to rise even further. The 6.9 earthquake killed at least 98 people. At least 236 people were injured. The damage is also enormous: more than 20,000 residents had to leave their damaged or collapsed houses.

Many tourists meanwhile try to leave the island. On Tuesday they boarded ferries to the nearby island of Bali. After the earthquake of Sunday followed 230 aftershocks, reports the Indonesian office for meteorology, climatology and geophysics (BMKG). Lombok was also hit by an earthquake on 29 July. That natural violence cost at least 17 people.