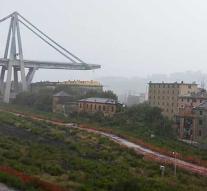 genoa - Rescue workers in Genoa fear that the pieces of suspension bridge that are still standing, will also fail. They have indicated that buildings in the vicinity of the bridge are being evacuated.

A large part of the huge bridge that spanned a valley with the river Polcevera, residential areas and industrial estates collapsed shortly before noon. One of the three pylons of reinforced concrete collapsed and about 200 meters of motorway collapsed. Most of the victims were in the estimated 35 cars or trucks that crashed.

According to various authorities involved in the relief, around 35 people died. Of the wounded, five are very serious. There is nothing to say about the cause yet, the authorities in Genoa emphasize. The disaster happened during heavy thunderstorms and storms.

Eyewitnesses reported that lightning struck the high concrete pylon that collapsed. Others point to problems with the construction that already appeared shortly after the opening of the bridge in 1967.

The bridge is a product of architect and engineer Riccardo Morandi (1902-1989). He has become internationally famous for his design for bridges made of reinforced concrete and steel cables. One of his most famous works is a much longer version of the bridge in Genoa built in Venezuela. This bridge over Lake Maracaibo (General Rafael Urdanet Bridge) is almost 8.7 kilometers long and opened in August 1962.