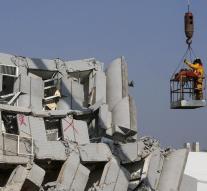 - Rescue workers in a collapsed apartment building in the Taiwanese city of Tainan still looking for over 120 people. The emergency services have according to Mayor William Lai effort to reach a large proportion of the victims.

,, About 103 people are very deeply buried under the rubble of buildings that collapsed on each other, '' Lai said, referring to the collapsed tower.,, It is very difficult to reach them directly. '' Rescuers should focus their attention on 29 people who are closer to the surface buried.

The bailout is more than a day after the earthquake is still in full swing. Firefighters, police officers, soldiers and volunteers searching, sometimes with their bare hands in the ruins of the building for survivors. Dozens of relatives of missing people have gathered at the crash site.

The rescuers took Sunday a twenty man alive from the building. Meanwhile, the growing despair at the relatives of other victims. A man who was rescued, was stopped according to the Taipei Times, when he wanted to enter the collapsed apartment to find his wife and children.

A local resident told the newspaper that the building almost immediately collapsed during the earthquake.,, I can not believe that a building that looked so firm could collapse in ten seconds, '' the man said. There are still investigating whether there was cheating in the construction of the building.

By the earthquake are certainly 23 people were killed. Hundreds of people were injured. In addition to the seventeen-story apartment also yielded eight other buildings.