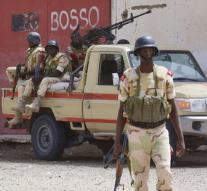 lagos - The Nigerian military has been guilty of excessive force against Shiite Muslims, with 348 deaths.

That conclusion draws a commission of inquiry into the West African country. Key recommendation in the report released Monday: prosecution of the soldiers who committed the massacre in December last year.

The army took time and hard against Shiite activists in the city of Zaria. Which would have been planning the chief of staff of the army to bring life. Human rights organizations withdrew that story quickly questioned. They now receive directly from the inquiry, which heard 87 witnesses and include thousands of letters and emails looked on the massacre.


The big question now is whether it will actually come to investigation and prosecution.

Shiites are a small minority in Nigeria. The bulk of the population of some 180 million people are Christian or Sunni Muslim.