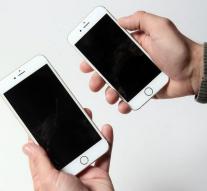 - Apple has set up a special repair program for the iPhone 6 Plus. This was announced by the company from Cupertino Thursday. The problem with the iPhone 6 Plus includes the touchscreen, that in certain cases no longer responds to touch. The repair is not free: customers must pay 167.10 euros.

That the iPhone 6 Plus can become bent quickly became known after the introduction of the device. Now, the bending problem appears therefore to have more consequences. iFixit speaks of a design flaw.