Home / World / Rembrandt is not from England 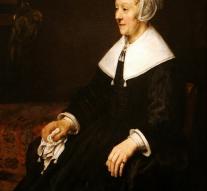 london - Portrait of Catrina Hooghsaet that Rembrandt painted in 1657 , should not for the time being England . The British Culture Minister Ed Vaizey has decided that the cloth is too important to resale to disappear abroad . The decision applies to mid- February 2016 , in the hope that reports a British buyer for that time. That the BBC reported Friday .

The painting is privately owned and is generally regarded as one of the most important works by Rembrandt in England . It's been 250 years in English possession.

The painting hangs alternately in the National Museum of Wales and in the Ashmolean Museum in Oxford . The prospective buyer should be converted approximately 48 million Euros to get it .

Catrina Hoogsaet was in the seventeenth century a wealthy Amsterdam and Mennonite woman , married but living alone . The painting was also depicted her parrot on her specific request by Rembrandt.