Home / World / Remarkably, out of the signal space 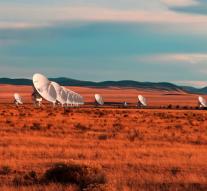 amsterdam - Scientists investigate a remarkable signal from a star 95 light years from Earth. It may indicate the existence of an extraterrestrial civilization that is far more advanced than ours.

The signal May last year was collected in Russia, but the news has been made public only by space journalist Paul Gilster. The data signal last year were shared in secret among scientists.

Around the star, much like our sun, running at least one planet, as large as Neptune. However, there may be multiple, undiscovered planets.


According to astronomers is far from certain whether the signal was sent by aliens. Possibly, it is a natural phenomenon or a ghost signal. Nevertheless, it is interesting enough to investigate further by SETI (Search for Extraterrestrial Intelligence), an international alliance of alien prying 'scientists.