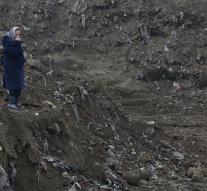 sarajevo - When discovered a new mass grave in eastern Bosnia and Herzegovina have been recovered to date remains of thirty people now. That Sarajevo, the public prosecution said Tuesday. The grave was discovered north of the town of Kozluk. It was hidden in a landfill.

According to reports from eyewitnesses Serb soldiers and guerrillas in July 1995 in this environment thousand Muslim men and boys were killed and buried. They probably came from the nearby Srebrenica, which was under the protection some time of Dutch UN soldiers.