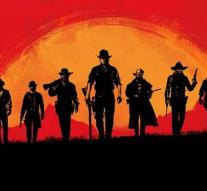 los angeles - The sequel to the game Red Dead Redemption will be announced later on in the market. Red Dead Redemption 2 would be in stores this fall, but the release has been postponed until spring 2018. The game is not yet ready, developer Rockstar Games reported Monday. The studio did give some screenshots of the game.

Red Dead Redemption 2 is for the Playstation 4 and Xbox One. According to Rockstar Games, it becomes an epic bandit story in the middle of America. The first part, Red Dead Redemption, came out in May 2010. It was sold more than 15 million times.