Home / World / Relative to brawl between spies in Moscow 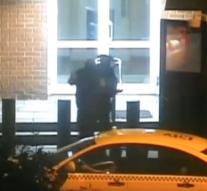 moscow - A uniformed member of the Russian security service FSB has attacked a US diplomat who was about to enter its embassy in Moscow. Russian state television NTV showed footage showing that the Russian tackles the American.


It is not the first time that the right for the US Embassy in Moscow comes to a fight. The newspaper The Washington Post made June 29 report of an attack on a US diplomat by the FSB. Thereby shoulder the diplomat was broken.