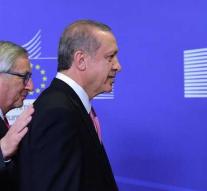 brussels - A summit meeting between Turkey and the EU on Monday in Bulgaria, intended to defrost the relationship, threatens to miss its target. Ankara is angry because the 28 EU leaders have sharply criticized the country.

President Recep Erdogan meets EU President Donald Tusk and European Commission President Jean-Claude Juncker in the city of Varna on the Black Sea. But 'due to an accumulation of problem files' it will not be easy, says Juncker.

EU leaders condemned Turkey at their summit in Brussels for 'illegal' naval activities in the waters of EU member Cyprus. The Turks prevent gas drilling at the island and EU leaders demand that Ankara stops. They also have 'serious concerns about the continued detention of EU citizens in Turkey, including two Greek soldiers. '

The Ministry of Foreign Affairs now accuses the EU of 'unacceptable statements' and threatens that 'of course, no constructive results. '

According to Tusk, other sensitive issues are also discussed, such as the Turkish actions in Syria.