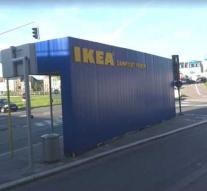 ghent - It looks like an innocent advertising stunt, but the city council of the Belgian city of Ghent can not laugh: two bus shelters that have been converted by Ikea. The alderman is furious.

The bus shelters and advertising liner could be used by the city government by advertising company Clear Channel Belgium. 'We have a clear contract with them', says Alderman Filip Watteeuw, who is responsible for public space.

'There are rules in that contract. If they want to do something special, it is possible, but only with permission from the government, the city. No permission has been requested for this. And we would not have given them either. '

According to Watteeuw, the biggest problem in safety, he says to Het Nieuwsblad. 'It is dangerous: this hinders the visibility of cyclists at the Dampoort,' he says.

'Moreover, the timetable is no longer clear. This is not possible. We have told Clear Channel that they have to remove the advertising, today. Otherwise we do it, at their expense. '

At Clear Channel Belgium nobody could be reached for comment at this time.