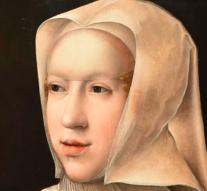 mechelen - Belgian archaeologists on Wednesday found the stomach and intestines of the former regent of the Netherlands, Margaret of Austria. The casket with the body parts was as hoped in a cavity under a tile in the Mechelen St. Peter's and Paul's Church.

Margaret (1480-1530), daughter of Maximilian of Austria and Mary of Burgundy, ruled from the Court of Savoy in Mechelen two periods over the Netherlands. Her remains were buried after her death in France, but the leaden casket with the guts remained according to royal use in Mechelen to her.

The box was a trace after it was built a new floor in 1981. A radar scan revealed two weeks ago the cavity at the Marian shrine in which the researchers hoped to find.

The casket is ultimately the ground again. Mechelen will indicate the location of church visitors and tourists.