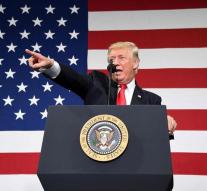 austin - US cities like Houston and Dallas boycotting the immigration leader of President Donald Trump can not yet be fined financially. A federal court in Texas has blocked a law that allows this. He believes that the law may be contrary to the constitution.

Trump wants cities to act hard against illegal migrants, but there are cities that do not like it.

The judge has blocked the law with a provisional provision.