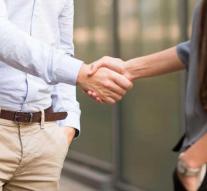 lausanne - Two Muslim people have not been granted Swiss citizenship after they refused to shake hands with people of the opposite sex. The attitude towards equality was reason to reject the application, reports Gregoire Junod, mayor of the city of Lausanne.

The couple was heard by a committee of the municipality a few months ago, but it went wrong with the 'integration' piece.

Brgemeester Junod does not want to reveal the identity of the two, but lets it go that it is about refusal. According to Der Landbote, a Swiss newspaper, it concerns Islamic people. There is a group of strictly religious Muslims who do not touch people of the opposite sex, unless it concerns family members within the marriage or close relationship.

The couple has 30 days to appeal against the decision, writes the Swiss newspaper.