Home / World / Refugees on British base near despair 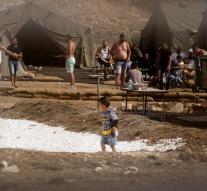 dhekelia - A group of 114 boat people bound for Europe stranded on a British military base in Cyprus. The UK authorities claim that they want to resolve the situation as soon as possible, but the unrest among the asylum seekers increases. Meanwhile put their tents on fire and refugees have injured himself or threatened to commit suicide.

" We are here by mistake, to escape the war ", The Guardian Tuesday quoted an audio message from a young Syrian woman. The newspaper recalls that it is not the first group of refugees who landed on the base of Dhekelia. In 1998 there were 67 Iraqi and Syrian Kurds ashore. This group is seventeen years later, still on the base. Because of the special status of Dhekelia, they can not go.