Home / World / Refugees in the fist game of football 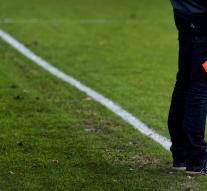 emmerzhausen - A football match between refugees in a shelter in the German Emmerzhausen Wednesday ended in a mass brawl. About three hundred refugees went to blows with each other, police reported Thursday. There was certainly wounded.

The game of football was organized by the refugees themselves. Syrians and Iranians were playing against each other. The match ended in a fight, first between a hundred refugees, mostly men. It was equally quiet on the premises, but an hour later the situation escalated again. This time it was a fight between three hundred residents of the shelter.

Police and security pulled the fighters apart. What was the reason for the quarrel is unclear.