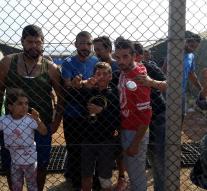 london - Britain has Syrian, Palestinian and Lebanese refugees in Cyprus issued an ultimatum. The refugees residing in a base of the Royal Air Force (RAF) have seven days to apply for asylum in Cyprus, otherwise they will be sent back to Lebanon.

Two fishing boats with 115 people on board, three weeks ago at the RAF base. Although it is formally British territory, the British authorities say they have an agreement with Cyprus.

The refugees received Sunday a letter stating the ultimatum. A spokesman for the British Government have now 38 of them requested asylum in Cyprus.