Home / World / ' Refugees do not demonize after attacks ' 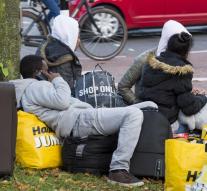 geneve - The UN refugee agency UNHCR urges European countries to not to associate the attacks in Paris with the refugees. People who are fleeing persecution and conflicts must not be rejected or blamed.

" We are concerned about reactions from some countries that want to terminate existing programs, returning to commitments to the refugee crisis manageable, or that raise new barriers to erect ", according to the head spokesperson of the UNHCR. " We are very concerned about statements that demonize refugees group. This is dangerous and contributes to xenophobia and anxiety. "

Not only in Europe, asylum seekers are associated with the attacks, including in the United States will continue to keep more vote for refugees from Syria. More than twenty Republican governors try to close their states before the arrival of asylum seekers. Republican presidential candidates also come up with plans in that direction. They want no Muslim refugees but only Christians.

President Barack Obama speaks shame. " When I hear suggestions from political leaders that there is a religious test to come is shameful. That's not American. That's not who we are. We have no religious test for our compassion. "