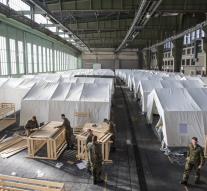 - On the former, famous Tempelhof airport in Berlin late Sunday, the first refugees collected. In a hangar of the airport, which was once one of the largest buildings in the world, because of the continued influx of asylum seekers an emergency center equipped.

A bus with about sixty asylum seekers came from the Land of Bavaria to. Actually, there still arrive Sunday a bus, but the driver was mistakenly drove to Brandenburg. The asylum seekers are temporarily housed there.

Tempelhof, built in 1923, was expanded considerably during the Nazi era. Adolf Hitler wanted the airport to make part of the future Germania, was awarded the new name for Berlin as the war. Although the airport because of the Second World War was never completed, it was one of the largest buildings in the world. In late 2008, Tempelhof was closed.