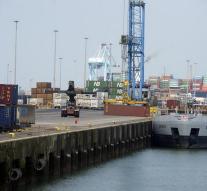 brussels - In the port of Zeebrugge, the maritime police Tuesday released seven Iranians from a container. The refugees called the police himself because they had insufficient air, the prosecution states in Bruges.

The victims were found in a container of wine crates on a ship waiting to depart for England. They are in good health.

In recent months Zeebrugge is popular for migrants heading for the UK. Recently, therefore, a new law criminalizing the entry of a port.