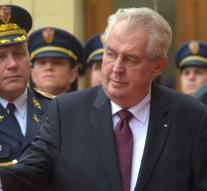 prague - The Czech President Milos Zeman argues that the flow of refugees to Europe " organized invasion". He stated this Friday on the Internet. " Approximately 90 percent of the migrants on the Balkan route are healthy young men and absolutely no looking miserable refugees. "

The 71-year-old Czech head of state wants migrants are stopped at the border and immediately returned. These are offenders and violators of the border, says Zeman.

The Czech president has a largely ceremonial function. However, he expresses the fear of migrants expressed by many Czechs. In a recent poll, 67 percent of respondents fear the flow of migrants and 83 percent feared the arrival of Islamists.