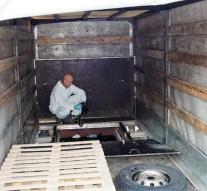 waidhaus - Pressed in a narrow cavity of 30 centimeters high, eight refugees survived a 1000 kilometer journey. They were in the cargo of a small truck.

In the end, the refugees were discovered and liberated by the German police in the Bavarian Waidhaus. The 41-year-old driver of the truck coming from Romania has been arrested.

In a 1.20 meter wide, 3.30 meter long and only 30 centimeter high cavity lay seven men and one woman. The 18- to 37-year-old immigrants came from Iraq and Turkey. They had hidden in space during the 1000 kilometer journey. A life threatening torture, according to the police.

'We have seen a lot, but people push in such a small hatch, that's incredible,' said the police spokesman. 'It's real madness, what the smugglers do with people. '' The refugees, after their discovery, were struggling to crawl out of the hatch. 'They were all stiff. 'They had hardly been drinking and unable to move.