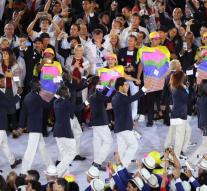 - The International Olympic Committee (IOC) refugee team does not know whether there will be back in action at the 2020 Olympic Games in Tokyo. This year at the Games in Rio de Janeiro took ten refugees along under the Olympic flag. It was the first time that such a team was formed.

The ten athletes from South Sudan, Congo, Syria and Ethiopia had to ask attention worldwide in Rio for the refugee problem. 'We do not know whether this is again required in Tokyo,' said Pere Miro, the IOC Tuesday.

Despite the fact that the decision on a refugee team has yet to be taken, the IOC does have sounded national committees on refugee athletes who can qualify for the Games. \u0026 Nbsp; The ten Olympians who participated in Rio are still supported by the IOC, Miro told emphatically.